Sockeye (red salmon) returns to the Copper River this summer were extremely encouraging. ADF&G reported a commercial harvest of 1.3 million sockeye. Compared to 2018, the average weight increased by 0.5 lb. to averages of 5.5 to 6lbs. The peak for sockeye was about a week and a half later than usual (early June instead of late May).

As for Chinook (king salmon), the commercial harvest totaled about 18,000 and the subsistence run was also strong. Once again, the runs were late by about a week. The age composition within Chinook harvests is changing. While we used to harvest more six year-old Chinook, now we are harvesting mostly five year-old Chinook of smaller weights. The reason why is still a mystery.

Numbers for Coho (silver salmon) harvests are still "on the fence". Coho may simply be running late like the Chinook and sockeye. Currently, Coho returns and commercial harvests are well below their historical averages. According to ADF&G, "the cumulative Coho salmon harvest through September 3th is approximately 77,000 fish, which is 79,000 fish below the recent 10- year average" for the Copper River District. Since survey counts are still below escapement targets for Coho, the Copper River District fishery will remain closed to commercial drift gill-netting (Cordova ADF&G). 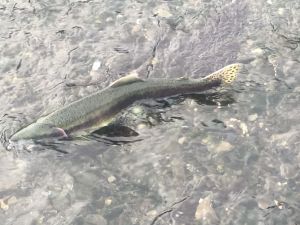 The season for humpbacks (pink salmon) continues, but the climatic conditions have caused challenges for pink harvests. Many salmon streams didn't have enough water due to drought conditions, which has caused pinks to hold offshore. Thousands were stranded due to low water levels. The current drought conditions are an outlier for the area.

(All of the above reflect notes taken from a conversation with local fisheries biologist at Cordova Alaska Department of Fish & Game).

It is increasingly obvious that climate change is already impacting our bountiful salmon fisheries. Our collective job as a community is to present the facts and brainstorm solutions.

Please feel free to join in with your fishery news and reports. Send comments to: info@redzone.org.