Northern Edge war games
in the Gulf of Alaska

Northern Edge 2019 was conducted in the Gulf of Alaska from May 13-24, 2019. The military war game exercises have increased considerably: for the first time in ten years an aircraft carrier strike group participated: there were 10,000 soldiers and officers (up from 6,000; military personnel was largely involved in the land-based exercises); approximately 250 aircraft from all branches of US forces (up from 175); there were 5 ships as well as the nuclear aircraft carrier Theodore Roosevelt. There was no submarine activity this year, but once again, no non-military observers were allowed. There is clear evidence that Navy sonar leads to beaked whale mortalities.

While the military states "there is little impact to salmon," they provide no data to corroborate these statements. Ships that participated were the aircraft carrier USS Theodore Roosevelt, three Arleigh Burke-class destroyers (USS Russell, John Finn, and Kidd) and supply ship USNS Henry J. Kaiser. Kaiser is one of two Military Sealift Command ships supporting Northern Edge 2019. MSC fleet replenishment oiler USNS Rappahannock (T-AO 204) also provided logistics support in the area. We will continue to post links to news items in the list accessible through the Resource Materials section below.

NEXT STEPS: This summer (date unknown so far) the US Indo-Pacific Command will initiate a process to produce a Supplemental EIS, for Northern Edge exercises beyond 2022. We will post more information and an action alert here as soon as the period for public scoping comments opens.

Several branches of the US military conduct war games called "Northern Edge" in the Gulf of Alaska in odd-numbered years.

What is at stake?

The Gulf of Alaska is vital marine habitat for millions of fish and an abundance of whales and birds. The integrity of the Gulf's marine ecosystem is the backbone of commercial and subsistence fisheries, and it directly supports the regional economy, livelihoods, and food security of coastal communities all around the Gulf.

Conditions in the Gulf have changed due to a multitude of environmental factors including climate change and ocean acidification since the Navy's Northern Edge environmental impact statement (EIS) was completed in 2011 and supplemented in 2016. Common local concerns include the declining size and abundance of salmon; reduced abundance of forage fish for salmon, seabirds and sea mammals; sea bird mortality; and adverse climate and water temperatures changes. Use of sonar and (potentially) explosives in NE19 should be expected to add to these stresses that Gulf fish and wildlife are already experiencing. Particularly concerning are impacts that may occur in or near places where fish and wildlife concentrate, such as seamounts and other NOAA- or NPFMC-designated "habitat areas of particular concern" where negative impacts may be magnified.

What are the "Northern Edge" war games?

Northern Edge war games have been conducted 18 times in the northeastern Gulf since 1993, mainly in odd-numbered years (PDF here), and similar exercises under other names were conducted during the prior 20 years.

The Northern Edge EIS accommodates participation of "a complete Navy Carrier Strike Group (CSG), comprised of an aircraft carrier and several other combatant surface ships", but the EIS did not provide specifics on the number and kinds of ships this can include. This February, EPC wrote to the commanders of the military's Pacific Command and the Navy's Pacific Fleet, to flag limitations on the number of participating vessels that are buried in an obscure location of the EIS (PDF here).  We determined that the limitation in the EIS is 6 surface ships of unspecified kind and 2 submarines.

An early-2017 decision (based on the 2011/2016 EIS) governing Northern Edge exercises through 2022 was made by the Deputy Assistant to the Secretary of the Navy. The decision adopts the smaller-scale alternative of the two that were considered (e.g. allowing 143,000 vs. 352,000 lb. of unretrieved expended materials), and further it precludes vessel sinking exercises and the use of torpedoes. Despite this smaller scale, significant concerns remain over impacts from Northern Edge . Also, although the 2015 and 2017 Northern Edge exercises were smaller than permitted by the decision (PDF here),  Northern Edge 2019 may be larger than in those years, and the scale allowed by the decision allows remains a concern.

Why you should be alarmed about NE19 and NE21

The Gulf of Alaska is vital marine habitat, and its northeastern portion shown in the maps below is particularly important to the many communities that ring it. Salmon occupy the entire TMAA training area (black and red polygons), and any impacts on salmon are a great concern. The TMAA includes many prominent seamounts which are important habitat features for a wide range of sea life. For example, they create upwelling of nutrient-rich waters and provide uncommon habitat with differing substrate characteristics and plus a range of depths. Anti-submarine warfare training targets seamounts. 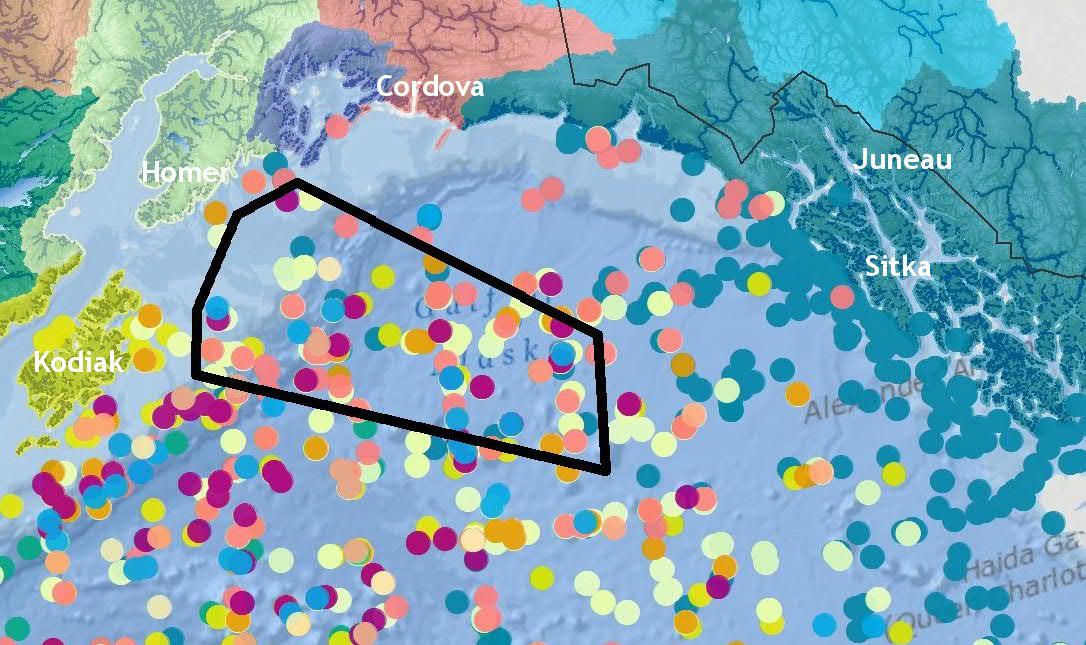 The Northern Edge decision and EIS allow the use of explosive bombs, missiles and naval artillery; the use of high-power (235 decibel) mid-frequency sonar; and nearly 800 active-sonar sonobuoys and 40 explosive ones. Up to 143,000 pounds of expended materials will not be recovered, and will end up afloat, on the bottom, or dissolved in the water column. Much of this material can take decades to decompose, and accumulates on the bottom year after year that these exercises are conducted.

Three species of beaked whales inhabit the northeastern Gulf, and the largest number of whale strandings worldwide associated with naval training exercises are beaked whales. This is because beaked whales are extreme-depth divers (to 9,800 feet, and likely deeper), and high-power mid-frequency sonar causes them to alter their dive cycles, causing decompression sickness (the bends) and sometimes severe organ damage. A 2017 study correlated changes in the dive cycles of a tagged Cuvier's beaked whale with a Navy exercise about 60 miles away. Since the Spanish government's 2004 ban on mid-frequency naval sonar within 50-km of the Canary Islands, there have been no further stranding in this former stranding hot-spot. In summer 2018, 80 already-dead beaked whales stranded in northern Ireland and northern Scotland were found not to have died from natural causes. There had been naval activity in the area. Concerning the Gulf of Alaska TMAA, dead or injured beaked whales are likely to go undetected, less likely to strand because of the TMAA's remoteness and the current direction. These whales are most likely to be present on the slope-break of the continental shelf and near seamounts.

In recent years, local government resolutions and EPC asked for Northern Edge to be conducted only in the southeast corner of the TMAA. It turns out that this request was based on a misunderstanding, since there is no officially designated "essential fish habitat" (EFH) for salmon there, and none of the seamounts there have protective designations. It turns out that these designations are arbitrarily absent because legal authority for NOAA and the North Pacific Fisheries Management Council to make them ends at the 200-mile line. In fact, as apparent from the two maps above, the southeast corner is deserving of EFH and seamount protections as well, if only they could be made. 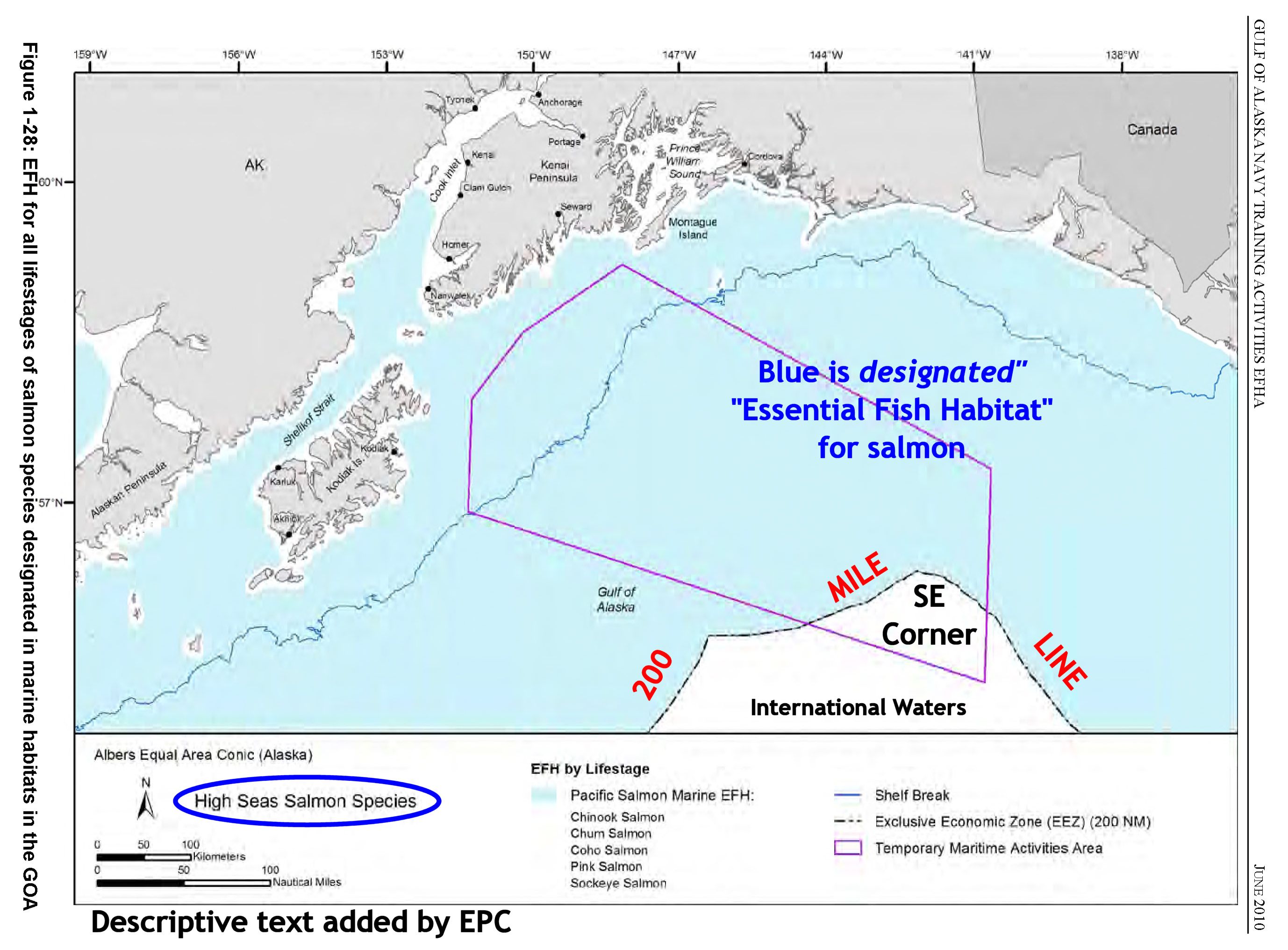